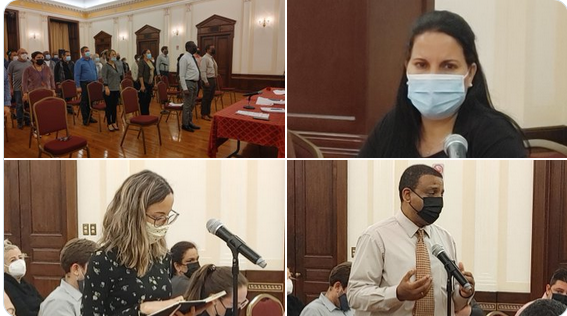 Through his Twitter account, the island’s permanent representative to the multilateral organization expressed his support for that document, which is the center of debate in the Caribbean nation.

As he stressed, it is a code that is not exclusive, on the contrary, it adds all the families in their various forms.

This as part of the consultation process that was carried out on the island on the text, which will later be submitted to a referendum. The consultation at the diplomatic mission in New York was chaired by Pedroso and conducted by Deputy Permanent Deputy Yusnier Romero, Doctor of Legal Sciences.

Romero Puentes explained the importance of this innovative document that gives due importance to families, the main ones in charge of transmitting values ​​and affection from generation to generation.

Likewise, he affirmed that although the current legislation of 1975 promoted ethical and moral values, that text no longer adjusts to the diversity of existing families in Cuba.

For this reason, the diplomat stressed, it is essential to have a Code that resembles the present and future of Cuban society.

During the conversation at the mission, numerous opinions in favor of the project were heard. Likewise, proposals for additions, deletions and doubts were registered on topics such as discrimination and violence in the family, rights of minors, guardianship and protection, formalization of marriage, economic regime of marriage, parent-child relationships, among other issues.

Recovery works in Cuba after hurricane described as a feat

Recovery works in Cuba after hurricane described as a feat