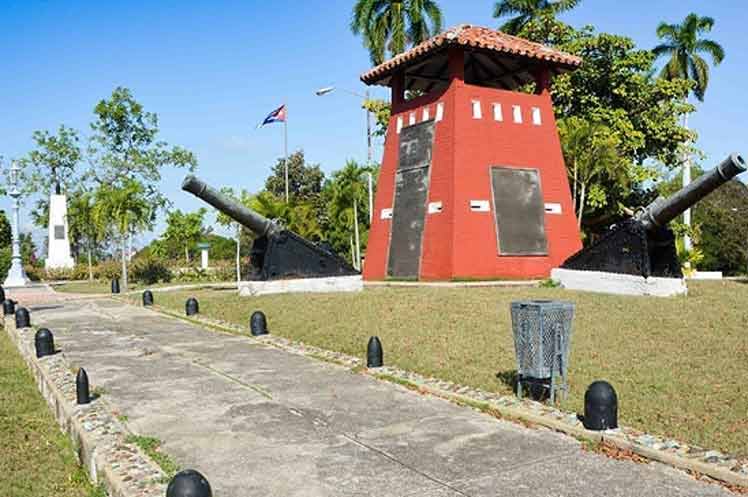 During their three-hour stay in the eastern province of the country, their majesties carried out an intense program in which the visit to the San Juan Memorial Park became a significant moment.

Located on the hill of the same name and in the very heart of Cuban history, this urban site declared National Monument commemorates the glorious pages of the events that took place in the same area and recalls the mambises – the name given to the Cuban independence fighters – and the U.S. and Spanish military.

In the complex, located east of the city, Felipe and Letizia placed a laurel wreath in front of the sculpture that pays tribute to the Iberian soldiers who fell in the Spanish-Cuban-American War, which ended in this scenario in July 1898.

The monarchs toured the various monuments and inscriptions detailing the confrontations, which sealed, with a peace without independence, almost 30 years of battle of the insurgents of the Liberation Army.

There you can appreciate artistic reproductions in bronze consecrated to the victorious mambí, the unknown American soldier and the Spanish combatant, along with commemorative tiles and obelisks, cannons and pieces of field artillery, all guarded by a pleasant natural environment.

THE TREE OF PEACE

On July 17, 1898, the capitulation of the Spanish garrison in Santiago de Cuba was signed under the Ceiba tree called since then the Tree of Peace, in the middle of the ignominious pretension of preventing the local troops led by the US, commanded by General Calixto Garcia, from entering the heroic town.

That fact clouded the glory of those transcendental minutes, as did the interference of the United States, whose participation in the conflict, when the mambises had practically won the conflagration against Spain, was the prelude to the neocolonial and imperialist intervention that would come later.

As if detained in time, with its enormous symbolic load and the contradictions of the historical events, the exponents of this memorial, offers visitors a synthesis of the evolution of the island at the end of the 19th century and only two years before the beginning of the 20th century.

The vestiges of the actions that took place there survive in every space of San Juan Park, the pride of Santiago de Cuba for the decisive role it played in the defense of the city during the Spanish-Cuban-American War, a conflict that put an end to the Spanish colonial rule over the Caribbean island.

The visit of King Felipe VI and Queen Letizia Ortiz marked a very high point in a transcendence based in the secular eagerness of Cubans for their independence.

University of Havana, 294 years of history

University of Havana, 294 years of history