Ukraine says negotiations with Russia could end in ten days 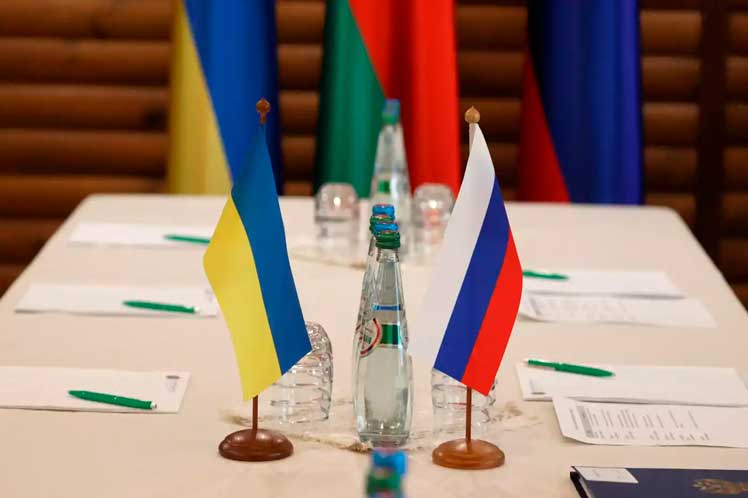 Ukraine says negotiations with Russia could end in ten days

In an interview with the Polish portal Wirtualna Polska, the head of the Kiev negotiating team said both delegations “maintain their positions”, so reaching an agreement may take several days. “During that time, we should be closer to drawing up a peace treaty,” he considered.

Yesterday, Podoliak wrote on his Twitter account that the parties have fundamental contradictions, but there is a possibility of reaching a compromise, while he described the negotiation as a “complex and hard” process.

Russian presidential spokesman Dmitri Peskov said Wednesday that his and Kiev’s delegations are discussing the possibility that Ukraine could become a demilitarized state.

This outcome could be considered a “certain type of compromise,” warned the senior official in response to a question from the press on the subject, which he preferred not to go into details because, in his opinion, it is “impossible” while the talks are in progress.

The head of the Russian negotiating team and presidential adviser, Vladimir Medinski, indicated that Kiev proposes to establish an Austrian or Swedish version of a demilitarized state in Ukraine.

He said that Russia seeks to reach peace terms as soon as possible, but negotiations with the counterpart are still complicated and slow.

The last round of consultations began last Monday in videoconference format and have continued throughout these days.

“We would like it to be an agreement for generations, so that our children also live in peace, this negotiation process is laying the foundation for it,” said the Russian representative.

Medinski underlined that Russia’s goal in negotiations with Ukraine has not changed and is the same as it has been since the beginning of the military operation.

“We need a peaceful, free, independent, neutral Ukraine, not a member of military blocs, not a member of the North Atlantic Treaty Organization (NATO), a country that is our friend, a neighbor with whom we are developing relations together, building our future,” he stressed.

He clarified that Moscow is against an Ukraine that is a springboard for military and economic attacks against Russia.