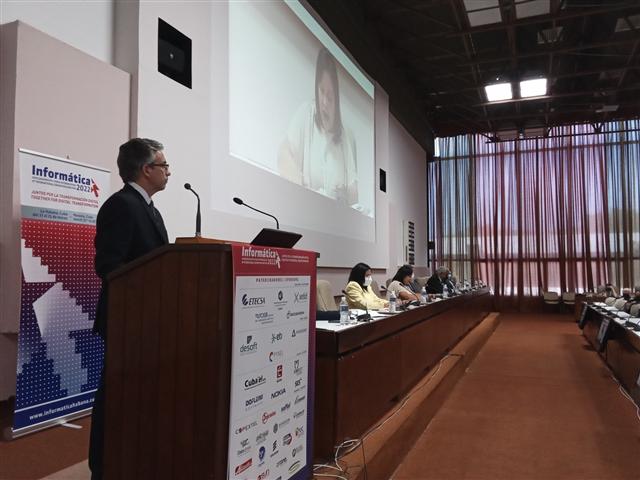 According to Cuban deputy prime minister, José Luis Perdomo, the process is based on the integration of what has been done to date in terms of computerization, and in order to strengthen the services provided by companies, government entities and the public administration, among other instances.

As part of his speech, held during the opening day of the 18th Convention and International Informatics Fair 2022, the official stressed that for a successful transition towards digital systems, it is also necessary to advance in the assimilation of characteristics inherent to this sector.

He described how, in the midst of an unfavorable environment marked by the intensification of the United States blockade against Cuba and an economic crisis derived from the Covid-19 pandemic, the Caribbean nation has Internet access above the world average, progress is being made in the use of wireless technologies and fixed access is developed.

He also pointed out that, being used as a tool for political manipulation where monopolistic information trends are harbored and destabilization is encouraged, the function of the network of networks to provide well-being is currently undermined.

Likewise, he extolled the need to promote own platforms and the generation of content, for the defense of the idiosyncrasy, culture and national identity.

According to him, he estimated that goals set in this area demand the creation of new capacities, diversification of the technological actors in the industry, and the strengthening of electronic government programs in the different municipalities.

On her part, the Minister of Communications, Mayra Arevich, highlighted the government’s will to continue increasing the services provided to the Cuban population.

She pondered the existence of two scientific-technological parks involved in more than 40 projects, and the approval of new micro, small and medium-sized companies that contribute to the development of this sphere.

She mentioned the existence of 4G technology in all the provincial capitals of the nation and in 49 percent of its popular councils, and the realization of a pilot test to increase connections from home through wireless networks.

To date, according to ministerial sources, the island has more than seven million cell phone subscribers, of which more than five million access the Internet through the use of mobile data.

The XVIII International Informatics Convention and Fair 2022 takes place from today until next Friday March 25th at the Havana Convention Center and, virtually, from the Fevexpo platform.

Experts from 14 countries such as Canada, Peru and Mexico will participate in it, where they will be able to attend nine events related to robotics, cybersecurity and telecommunications, among other disciplines, its organizers revealed in a timely manner.