Cuba is willing to strengthen inter-party ties with China 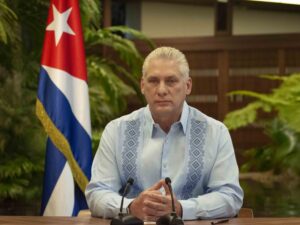 Cuba is willing to strengthen inter-party ties with China

In a virtual message sent to the 4th Theoretical Seminar between the communist parties of the two nations, Diaz-Canel, who is also Cuba’s head of State, stressed that these ties have historic roots with a long-term vision, which have become a benchmark of cooperation between two socialist and developing countries.

Diaz-Canel greeted the participants at the meeting and General Secretary of the Chinese Communist Party (CCP), Xi Jinping, with whom, he recalled, he has reached important agreements to promote the comprehensive development of bilateral ties and the practice of reporting on relevant events in Cuba and China.

“In the construction of socialism with its own characteristics, which you and we undertake, we have also considered ourselves as mutual references,” said Diaz-Canel, who added that they are united by common challenges, ideological identification, political trust and the maturity of the ties of friendship.

Diaz-Canel stressed that Cuba defends the unquestionable right of a small socialist country, located just 90 miles from the United States and without large natural resources, to exist as a sovereign and independent nation.

In that scenario, he said, “they have not been able and will not be able to bend a genuine Revolution, creator of an undeniable work of social justice and an accumulation of social achievements of universal scope.”