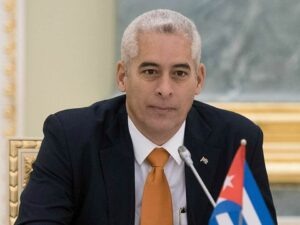 The meeting is scheduled for tomorrow at the headquarters of the host Ministry of Foreign Affairs, on the Quai d’Orsay, co-chaired by Peñalver and François Delattre, Secretary General of the Ministry for Europe and Foreign Affairs.

During the official talks, an assessment of the political dialogue and bilateral relations will be made and the development of economic ties and collaboration will be evaluated, said the Cuban delegation, which also includes Ambassador Otto Vaillant, the deputy director for Europe and Canada of the Foreign Ministry, Nelson Tamayo, and other officials.

Paris and Havana will also exchange views on current issues on the multilateral and regional agenda.

In Havana, the deputy minister will first meet with other representatives of the French government and with members of the National Assembly and the Senate.

His agenda also includes meetings with members of the solidarity movement with Cuba and Cubans living in France.

Peñalver arrived in Paris from Geneva, where he fulfilled an extensive program, with activities such as the installation of Cuba’s presidency in the Conference on Disarmament, a forum in which he advocated peace and the total elimination of nuclear weapons.

In mid-December last year, both countries strengthened their ties with the signing here of six cooperation instruments, at the end of the VI Bilateral Economic and Trade Commission.

Agriculture, water resources and health were among the sectors strengthened by the collaboration.

France is one of Cuba’s top 10 trading partners and was one of the main emitters of tourists to that destination before the Covid-19 pandemic, links with potential for growth, despite the extraterritorial impact of the economic, commercial and financial blockade imposed by the United States on the Caribbean island and its tightening.