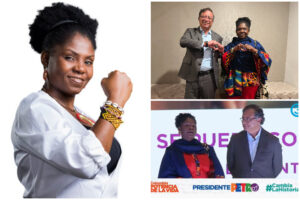 Petro pointed out that the election of Francia Márquez as the vice-presidential candidate was a multi-colored decision and stressed that she represents an excluded, enslaved, forgotten Colombia.

She is not the second, she is a team that will be filled with men and women in the presidency of Colombia, she said.

“Thank you for this moment, for this opportunity, it was each Colombian man and woman from their diversity, from each territory” that made it possible to reach this moment, said Francia Márquez on her behalf.

She greeted the peoples in resistance, indigenous, peasants, Raizales, Palenqueros, the LGTBIQ+ community, women, workers, the middle class, all religious and spiritual expressions, the youth, the Democratic Pole that promoted his candidacy for the movement I am because we are, among others who are protagonists of change beginning in Colombia.

“We want joy, peace, dignity, social justice to flourish” and this work requires everyone’s efforts to achieve victory in the upcoming May 29 elections, she emphasized.

In the internal consultation of the coalitions to choose the candidates for the presidency, Márquez was the third with the most votes (785 thousand 215) with which she surpassed the winner of the Centro Esperanza coalition, Sergio Fajardo.

This leader who assures that her decision to adhere to the Historical Pact was collective and who fights for the rights of women, of ethnic populations, against racial injustice, is undoubtedly the face of diversity in the new Colombian politics that is emerging from the alternative sectors.

Márquez, 39, is a lawyer, social leader and stands out for her tireless activism against the environmental impacts of mining, which forced her to move due to threats against her and received the Goldman Prize in 2018, considered as the environmental Nobel.

She studied, struggled against mining, for the rights of her people as a single mother, rural woman, peasant and humble.

In the words of Cathy Juvinao, elected to the House of Representatives for the Green Party, “If there is such a thing as political poetry, I believe that Francia Márquez embodies it. She is already history. The path she has opened is a joy for all the fighting women of Colombia “.