Delegation from Cuban Ministry of Justice winds up visit to Italy 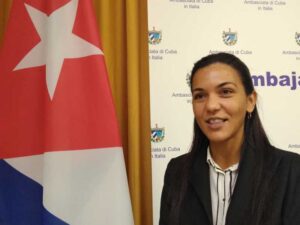 Delegation from Cuban Ministry of Justice winds up visit to Italy

During their stay in Rome, the delegation, which is also made up by Antonio Israel Ybarra, director of International Relations at the Cuban Ministry of Justice, met with Nicola Russo, head of the Department of Justice Affairs, and with Justice Minister Martha Cartabia at the Italian Ministry of Justice.

In statements to Prensa Latina, Diaz said that issues related to the possibilities of exchanging experiences among professionals from the two ministries, as well as others related to training and cooperation in areas such as the digitization of services, were discussed during the first meeting.

We also dealt with details regarding bilateral treaties that we are ready to sign, which are highly beneficial for both countries because they cover issues that will benefit legal services, she noted.

Referring to the meeting with the Italian minister of Justice, Diaz pointed out that it was a courtesy meeting, very cordial, during which she extended an invitation to her to visit Cuba.

On Friday, the delegation participated in a colloquium with Cuban residents in Italy and representatives of the solidarity movement, who were informed about the development of the legislative schedule in Cuba.

Cuban Ambassador to Italy Mirta Granda presided over the colloquium at the headquarters of the diplomatic mission about the drafting and popular consultation on the Family Code bill, and the Criminal Procedure Law and the Draft Penal Code, which were approved recently.

Diaz and Ybarra arrived in Italy from Austria and Belgium, after representing Cuba at the General Debate of the 65th Session of the United Nations Commission on Narcotic Drugs and holding talks on judicial matters with Belgian and European authorities, respectively.

During a meeting with Prensa Latina, the deputy minister said that she is “very satisfied” with the results of the tour, which she considered “a very fruitful, a very satisfactory journey, not only for the Ministry of Justice, but also at the country level.”