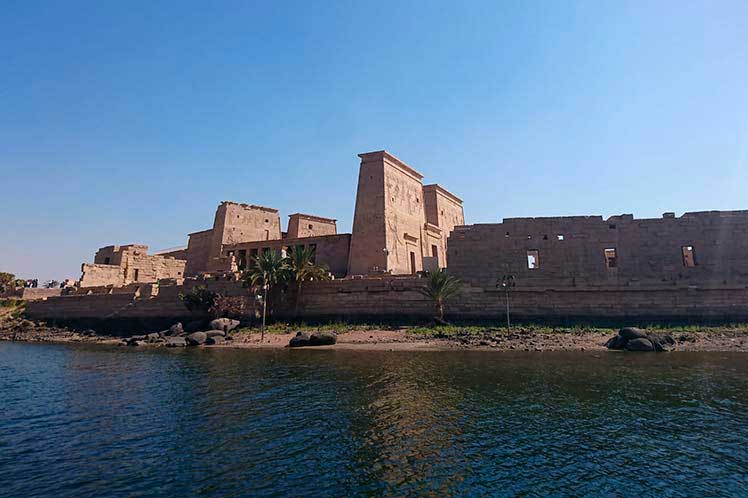 El Cairo, 28 mar (Prensa Latina)In the quiet waters of the Nile, south of the city of Aswan, silently stands one of the most beautiful places that a people have erected to honor its gods: the Temple of Philae, whose mixture of Greek-Roman and Egyptian styles specially thrill visitors.

The sanctuary stands on the island of Agilkia and is made up of a series of buildings and artistic works added throughout centuries, reason for which touring it is almost a journey throughout history since pharaoh Nectanebo I, from the 30th dynasty, began building an altar to worship Isis, goddess of magic and maternity, and continued by successive rulers of the Greek, Roman and Byzantine periods.

The island of Philae was initially chosen. It means “the extreme” in old Egyptian and represented the nation’s southern borders. Its location near the Tropic of Cancer gave it unique effects of lights and shadows that were considered supernatural by the area’s dwellers.

The legend has it that it was one of the places where the god Osiris, Isis’ consort, was buried. Isis brought her remains there after his brother Seth murdered and cut her into pieces.

Exiled on the island, she raised their children, Horus, thus completing the divine triad which both Egyptians and Nubians equally revered.

Throughout time the sacred site was expanding, but its boom occurred during the Hellenic and Roman eras, since several rulers, including Ptolemy II, erected important buildings to honor the goddess and her worship extended throughout the entire Mediterranean Sea.

Precisely for that, the preserved ruins show buildings of Greek and Roman style, but using the codes of Egyptian art, though some elements, such as the use of curves in the wombs and figures in general is away from the hieratic aesthetics of the country of pharaohs.

The complex includes several courtyards, built with the aim of always having the sacred site lit by the sun. Porticos and columns standout, all of them decorated with bass-relief hieroglyphics and less decorated brushes that in the rest of the monuments in Ancient Egypt.

The Temple of Isis which has an axial location on the island stands out; Trajan Kiosk, the top expression of the work with floral capitals; Adrian’s Gate, from the Roman age, and one chapel dedicated to Hathor –Egyptian goddess of love and Horus’ wife-, whose columns are decorated with scenes of musicians, dancers and gods.

Something that gives the sanctuary more charm, if that’s possible, is that the last hieroglyphs registered in time are located there. They date back to the year 394;you can also find the last text written in Demotic Egyptian, from 452.

Throughout the first centuries, Philae was considered a mythical and pilgrimage space, but already in the VI century, after orders by Byzantine Emperor Justinian 1 of closing the temples and banning the worship of the old gods, Christians damaged images and engravings, building an altar in the site’s walls.

Russia and Cuba are united by art, Diaz-Canel states

Russia and Cuba are united by art, Diaz-Canel states