Cuba has the possibility of growing four percent in 2022 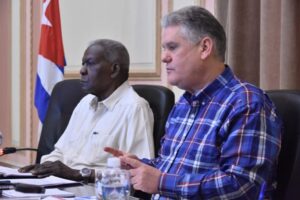 Cuba has the possibility of growing four percent in 2022

During the meeting with the presidents of the Municipal Assemblies of People’s Power held the day before, the head of Economy and Planning pointed out that although the country is recovering from a 13 percent drop and is still far from activity levels of 2018, it can grow four percent.

For this, the efficient implementation of the 158 measures approved as part of the Economic and Social Strategy for 2022 is necessary, he added, and referred to the fact that in the three months that have elapsed, a gradual recovery can be seen in aspects such as exports of goods and production of certain agricultural lines.

At the meeting, which was headed by Parliament President, Esteban Lazo, and included the participation of the Cuban Head of State, Miguel Díaz-Canel, and Prime Minister, Manuel Marrero, Gil reiterated the objectives of Plan 2022.

Among them, he mentioned the progress in the macroeconomic stabilization process, in the recovery of the role of the national currency in the financial system and in the rationality of the prices of products and services, particularly the most sensitive ones; as well as stabilizing the national electricity system.

In addition, prioritized attention to people, households and communities in vulnerable situations; transform the state business system, main subject of the economic model, and decentralize powers based on greater autonomy in the municipalities.

The minister explained some of the actions aimed at achieving these purposes, such as the detailed study of all companies with losses to adopt decisions adjusted to their situation, and the increase in fiscal control.

Also, the gradual establishment of a single price policy, inclusive and on equal terms for all economic actors, and the identification of suppliers with weight in the production of goods with a low imported component for their commercialization in Cuban pesos, in the state network.

Advance in access to quality jobs, fundamentally in production activities and provision of services; the increase in production of crude oil and gas; promoting the presence of national products in stores, and improving care mechanisms for people in vulnerable situations, are also among the actions required.

Gil explained that the update of the Strategy also contemplates other 102 measures in sectors such as transportation, industry, agriculture, domestic trade, foreign investment, tourism and public health.