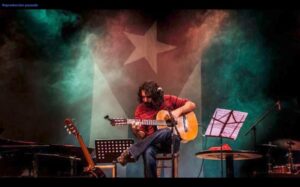 On Twitter, the minister mentioned a concert to honor Feliú, whose venue will be the gardens of the Union of Cuban Writers and Artists (UNEAC, in Spanish) on Tuesday afternoon, to which singer songwriters Gerardo Alfonso and Augusto Blanca have been invited.

Dead on Feb.12, 2014, at the age of 51, from a massive heart attack, Feliú recordered more than a dozen albums throughout his music career, including Ansias del Alba (Longing for the Dawn, 1997) in duet with his brother Vicente.

After this album, which pays tribute to the fight of the Zapatista Army of National Liberation, comes his intervention in the album Entre Otros, along with Noel Nicola, where three poems were set to music: “Quien sabe se va a ti,” by César Vallejo; Estoy en el baile Extraño and No empañes tu vida, by José Martí.

On Monday, the Casa de la Amistad (Friendship House) of the Cuban Institute of Friendship with the Peoples (ICAP, in Spanish), located on Paseo and 17, in Plaza de la Revolución municipality, was the venue of a concert to honor Feliú, organized by the University Student Federation (FEU, in Spanish).