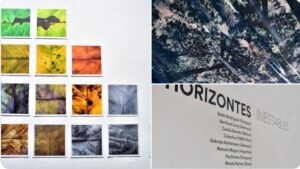 Organized by the Photographic Library of Cuba, the exhibition is part of the program of the 14th Havana Biennial, the biggest event of contemporary visual arts in Cuba, which enjoys the support of hundreds of professionals of the guild, after the boycott attempts that took place at the end of 2021.

On this occasion, the creators articulate pieces in charcoal, photosensitive emulsion, mosaics, installations and video projections, to call attention to the irresponsible actions of mankind, which have caused the acceleration of climate change.

Highlights in the selection include titles such as Entre lineas, by Brazilian Renata Roman, whose photographs printed on matte couche paper allude to the configuration of plants, human beings and the environment, as well as the sound installations by Paraguayan Paz Encina, which address the issue of deforestation.

Likewise, the work of the Fibra collective stands out, which took as inspiration the forest fires affecting the Ucayali region (Peru), while Gabriele Rothemann (Germany), Marcela Magno (Argentina) and Cecilia Barreto (Mexico), explore the relationship between art and the environment.

According to the curator of the show, Margarita Sanchez Prieto, this project stands out for the vision it offers of the landscape, which transcends conventionalisms and analyzes the expressive capacities of the environment, beyond the beauty of the landscape.

In this sense, Magno’s proposal stands out, which, through photographic captures from Google Earth, details the areas of natural resource extraction and warns about the environmental disaster, social deformity and the future of the continent.

The Biennial, which opened its doors in Cuba on November 12, 2021 under the slogan Future and Contemporaneity in response to the wishes of artists and specialists in the visual arts to meet again after the social isolation imposed by Covid-19, will be held until April 30.