Rousseff urges to invest in the poor to combat inequality 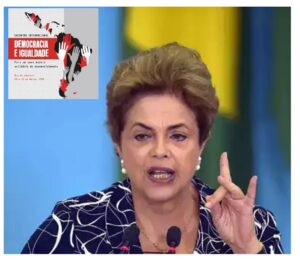 Rousseff urges to invest in the poor to combat inequality

“It is no secret to anyone that an advance of neoliberalism and a setback of democratic, social movements and the absence of these in government spaces predominate in the region,” Rousseff said at an international meeting of the Puebla Group, which brings together progressive leaders from 16 countries in Latin America and Europe.

The forum promotes the debate Democracy and Equality: towards a solidarity model of development, whose objective is to reflect on challenges in the subcontinent and in the world.

For the former president, it is imperative that Latin America once again join efforts towards greater integration between countries and these be less dependent on the export of raw materials.

She considered that the potential power of Latin America has to be strengthened and centralized, “in whom?”, she answered, “in our regional integration”, she limited.

In another part of her intervention, Rousseff warned that the sanctions on Russia, involved in a conflict with Ukraine, by States and Europe “generate an absolute risk of deglobalization.”

He specified that the reality in Ukraine will put an end to the globalization of the last three decades and will have lasting economic consequences for the whole world, as stated by a director of BlackRock Inc, a US company considered the largest asset and risk management company in the world.

According to the organizers, the former Brazilian head of state Luiz Inácio Lula da Silva will be in charge of closing tomorrow at 18:00 local time at the State University of Rio de Janeiro (UERJ) the work of the meeting with the seminar entitled Equality and future of Latin America.

The Puebla Group was founded in July 2019 in the Mexican city of the same name during a period of political resistance, amid coups and the dismantling of the regional union effort.

According to the rector of the UERJ, Ricardo Lodi, the need to invest heavily in education, health, science and technology to guarantee a better quality of life for the Latin American population will be highlighted during the two days in the discussion panels.