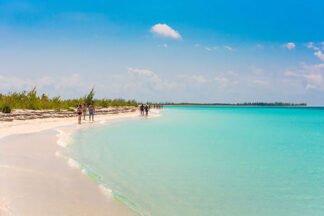 Lisbon, Mar 29 (Prensa Latina) A group of 150 Portuguese tour operators on Tuesday reported on their plans to promote the Cuba destination in this country due to its virtues and safety.

They said in a report on Tuesday that they have recently celebrated a Fiesta Cubana (Cuban Party), organized by the firms Sonhando and Solférias at the VIP Executive Art´s Hotel of this capital.

Cuban traditional music and dances were part of the working day, where the hotels promoted by these tour operators were presented to sell Cuban keys as tourism destinations.

This summer, besides the traditional offers of Cayo Coco and Cayo Guillermo, Cayo Cruz, an emerging destination on the northern coast of Cuba’s Camagüey province, will be also promoted.

There is a modern accommodation infrastructure on Cayo Cruz beaches, including hotels Iberostar Selection Emeralda and Valentin Cayo Cruz.

Other participants were representatives of hotel chains such as Meliá, Iberostar, Accor, Blue Diamond, Gaviota and MGM Muthu Hotels, a company that highlighted its offers for tourists in Jardines del Rey such as the hotels Gran Muthu Cayo Guillermo, Gran Muthu Imperial and Gran Muthu Rainbow,

Sonhando CEO, Jose Manuel Antunes, recalled that charter operations to Jardines del Rey date back to 2014, as a result of the collaboration with Solférias.

So far, over 25,000 Portuguese tourists have arrived at the Cayo Coco resort through this connection between Cuba and Portugal.