Lula asked in the Puebla Group to respect territorial integrity 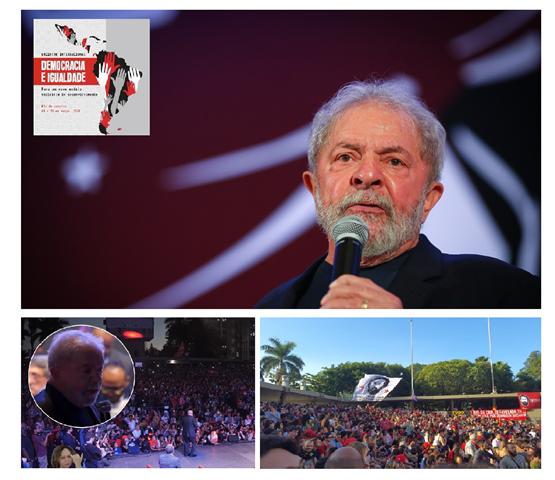 Lula asked in the Puebla Group to respect territorial integrity

“I want countries to be treated equally, we have to respect the territorial integrity of each country,” Lula told a packed auditorium at the Marielle Franco Acoustic Shell of the State University of Rio de Janeiro (UERJ).

During his speech, full of anecdotes and successes of the 13-year mandate of the Workers’ Party (PT), Lula described the far-right leader Jair Bolsonaro as “boçal” (ignorant).

“We have lost the right to be outraged by negligence, with a president (Bolsonaro) who lies seven times a day, provokes, says nonsense, offends and put a Minister of Health without knowing anything about health and who set up a gang to sell vaccines at the time of the pandemic” of Covid-19, criticized the former ruler (2003-2011).

He considered the ex-soldier fragile and rude, “since he has no political party, no flag, no music, no anthem, no program, no manifesto, he took the jersey of the national team and the Brazilian flag,” he said.

He remarked that the insignia and the green and yellow colors “do not belong to this fascist (Bolsonaro), they belong to 213 million Brazilians. He seized it as if it were his own,” he added.

The Puebla Group was founded in July 2019 in the Mexican city of the same name during a period of political resistance, amid coup riots and the dismantling of the regional union effort.

The forum is made up of leaders of progressive parties from 16 Latin American countries and Spain who, during the two days of the meeting at the UERJ, prioritized vital issues such as equality, democracy, social justice, solidary development and inequalities.

Without mentioning names, Lula also called on world leaders to “stop this war,” alluding to the conflict in Ukraine.

Russia began a special military operation on Ukrainian territory on February 24, in response to the help requested by the self-proclaimed people’s republics of Donetsk and Lugansk, previously recognized by Moscow, to face the aggression of kyiv.

Before the speech by the founder of the PT, other speakers such as former presidents Ernesto Samper (Colombia), José Luis Zapatero (of the Spanish Government), Dilma Rousseff (Brazil), Alberto Fernández (Argentina) and the Hispanic vice president Yolanda Díaz greeted Lula and advocated for his victory in the October elections.

According to Rousseff, after the judicial parliamentary coup that removed her from power in 2016, she predicted her party would return to power for the next elections and “we will be in the streets to defend the reconstruction of Brazil.”