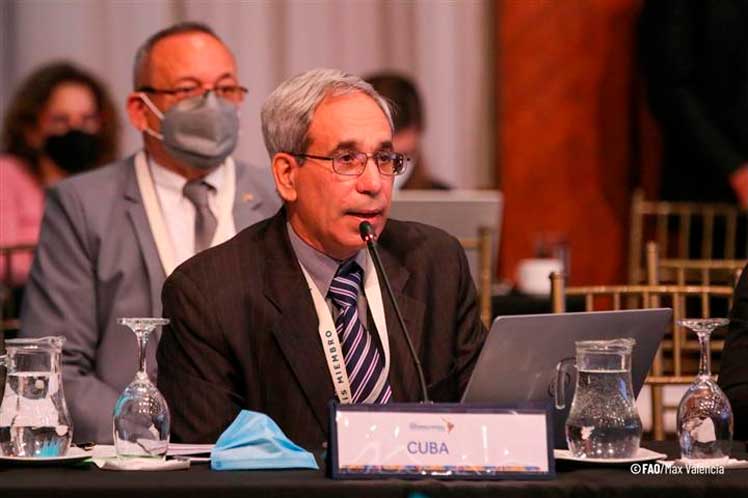 The call was made by Carlos Fidel Martin, director of International Economic Organizations at the Cuban Ministry of Foreign Trade and Foreign Investment, during the review of the final report of the regional forum of the United Nations Organization for Food and Agriculture (FAO) which brings together representatives from 33 countries in Ecuador.

Martin proposed to the Secretariat that the Conference urge members to strengthen multilateralism, solidarity and international cooperation, mainly South-South and Triangular collaboration, for the full realization of Target 2 on zero hunger, of the Sustainable Development Goal of the United Nations 2030 Agenda.

He added that those principles should be the “words of order” for all members of the organization.

Cuba’s stance was supported by those present at the meeting, who agreed on including it the Final Report, scheduled for tomorrow, during the closing of the event that opened on March 28.

The Cuban official also recognized the importance of FAO’s technical assistance to projects against climate change, and highlighted his country’s commitment to fight this phenomenon, in order to achieve sustainability and mitigate the negative effects on agroecology.

“Initiatives to confront climate change are a practice in Cuba, with the assistance of FAO, as an implementing agency in different projects to increase resilience in rural communities, with financing from the Green Climate Fund, of great relevance for our country,” he explained.

Martin took advantage of the occasion to ratify Cuba’s commitment to the Caribbean States to “share, not what we have left over, but what we have, despite the economic, financial and economic blockade imposed for more than 60 years by the United States on Cuba and coercive measures intensified in recent years.”

In statements to Prensa Latina after his speech, Martin explained that the proposal to strengthen solidarity, cooperation and multilateralism complies with the provisions of Resolution A/RES/70/1, paragraph 30, approved by the United Nations General Assembly on September 25, 2015, on the 2030 Agenda.

“This specific item refers to urging states to refrain from unilaterally enacting economic, financial, and trade measures that are incompatible with international law and the UN Charter and against economic and social development, particularly in developing countries,” he noted.