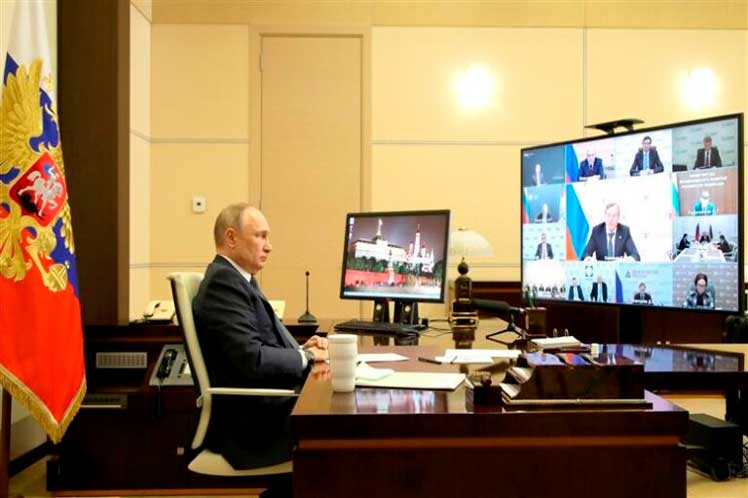 Speaking at a meeting to analyze the situation in the national aeronautics industry, the president recalled that a month ago European and US companies unilaterally renounced their commitments to Russian aviation and service companies.

He clarified that, in the meantime, the country’s companies fulfilled the existing contracts in full and were willing to continue doing so.

The head of state stressed that Moscow will respond to this attitude and assured the interaction with these “former partners” will no longer be as before, at least in the near future, the official Kremlin website indicated.

He expressed the country has all the capabilities to ensure that the Russian aircraft industry not only overcomes the current difficulties, but also receive a new impetus for its development.

“First of all, it is necessary to support our airlines so that they maintain stable and rhythmic work, employment and availability of air transport for Russian citizens. These are quick and urgent measures,” he stressed.

The state corporation Rostec reported that given the situation the country is facing, its first priority will be to guarantee timely and reliable maintenance of the current fleet of Russian airlines to avoid cuts due to the lack of spare parts or foreign specialists.

He indicated the second will be to renew existing aircraft programs in the shortest possible time and offer the domestic market more than 500 civil aircraft by 2030, TASS news agency reported.

Rostec pointed out that the latter will be with the MS-21, SSJ and IL-114 aircraft and the increase in serial production of Tu-214 and IL-96 airplanes.

“We must be realistic and understand that these tasks are not easily solved. We are talking about an industry-wide realignment. It takes time, resources and maximum stress. But all of that is possible,” he stressed.

The state corporation recalled that, according to the agreement on international civil aviation, passenger planes are an instrument of peace and understanding between countries.

“Unfortunately, today these principles have been violated by the West. War has been declared on Russian civil aviation,” he denounced.

On February 28, the Federal Air Transport Agency (Rosaviatsiya) reported that the country decided to close its airspace to 36 countries and territories in response to a similar measure against Russian planes.

The United Kingdom closed its airspace to planes from this country on February 24, following the start of the Russian military operation in Ukraine.

Three days later, the 27 member states of the European Union approved a similar measure for the use of community airspace, which was also joined by Canada and the United States, among other nations.

The West has so far implemented more than 6,300 sanctions against Russia, targeting key sectors of trade, finance, energy, exports, aviation and space.