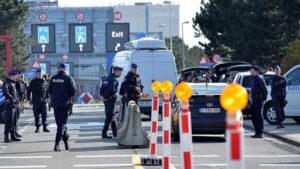 In order to protect the countries of the community bloc and Ukrainian refugees from criminal threats, and at the request of those countries, Europol now has agents in Lithuania, Poland, Romania, Slovakia, Moldova, and soon in Hungary, according to a statement from the Netherlands-based agency.

According to United Nations data, more than four million people have left Ukraine since late February, following the special military operation deployed by Russia in that country.

That figure represents about one-tenth of the population of that nation and constitutes the largest exodus in Europe since World War II (1939-1945).

The migration took place after the special military operation ordered by Russian President Vladimir Putin, following a request made to Moscow by the governments of the self-proclaimed Donetsk and Lugansk People’s Republics to repel the aggression of Kiev-supported neo-Nazi and extreme right-wing nationalist groups.

Putin explained that the operation is not directed at civilian targets, bu it is aimed at demilitarizing and denazifying Ukraine, and to protect the population of the Donbass from the abuses and genocide suffered during the last eight years.

More than half of the displaced people sought refuge in Poland, the United Nations High Commissioner for Refugees (UNHCR) said, although they have also made their way to Romania, Hungary, the Czech Republic, Slovakia, Belarus and Russia.

However, most of the nations taking in refugees today earlier received North Atlantic Treaty Organization (NATO) troops to militarily encircle Russia, according to statements from the military alliance itself.