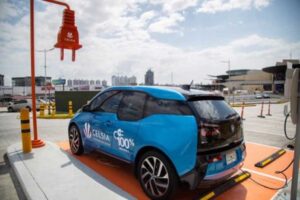 According to Juan Octavio Díaz, president of the House of Batteries, in Latin America and the world this is an unstoppable trend despite the resistance of many industries that do not want to lose their market.

The specialist explained to the newspaper La Prensa that electric mobility will be the common denominator on the planet, and pointed out that although last year only 78 vehicles of this type were sold in the isthmus, it represents an increase of 271% in relation to the 21 units marketed a year earlier.

According to a United Nations report, transportation in the region is responsible for 15% of greenhouse gas emissions and is one of the main causes of air pollution.

Luis Felipe Gómez, also from that institution, recalled that Panama launched the Green Light project, with which they created, in mid-2019, a network of chargers for electric vehicles free of charge, from this city to David, capital of the province of Chiriquí, powered by solar energy.

Along with the initiatives of private companies, the Electric Mobility Law, approved in the third debate in the National Assembly, also exempts the importation of these cars from taxes and for a period of up to five years the payment for their registration or license plates; it also gives preference for the construction of parking lots and allows the resale of energy to charge this type of transport.

In November last year, a caravan of 10 vehicles left San José (Costa Rica) for Panama to inaugurate the Electric Route, a 900-kilometer route with electric chargers.

The initiative was supported by the governments of the two nations, as well as by UN Environment, with the slogan that the use of oil can be abolished in a process of energy transition.

Panama’s Secretary of Energy, Jorge Rivera, indicated that electric mobility is already a reality in his country and added that with the help of a network of chargers from San José to the capital of the isthmus, the transition to this sustainable mobility is becoming more autonomous.

Gustavo Máñez, Climate Change Coordinator for Latin America and the Caribbean of the United Nations Environment Program, praised the Costa Rica-Panama binational work to achieve the decarbonization of transportation, which could become public policy.