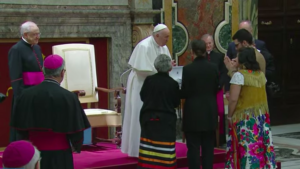 The Supreme Pontiff delivered the closing speech of the series of meetings held this week with representatives of the Metis, Inuit and First Generations groups, accompanied by their respective bishops, to listen to their testimonies.

Through your voices I have been able to touch with my hand and internalize, with great sadness in my heart, the stories of suffering, deprivation, discriminatory treatment and various forms of abuse suffered by many of you, particularly in residential schools, Francis said.

The Pope considered it chilling to think of the desire to instill a sense of inferiority, to make someone lose their cultural identity and cut off their roots, with all the personal and social consequences that this entailed and continues to entail, through unresolved traumas that become intergenerational.

The Bishop of Rome also expressed “pain and shame” for the role played by many Catholics, especially those with educational responsibilities, “in all that hurt you, in the abuses and the lack of respect for your identity, your culture and even your spiritual values.

All this is contrary to the Gospel of Jesus, the pontiff said, asking God’s forgiveness “for the deplorable conduct of those members of the Catholic Church” and stressing that “I would like to tell you with all my heart: I am very sad”.

Between 1890 and 1997, about 150,000 children from Canada’s native peoples were interned in dozens of residential schools created by the government and administered by religious orders, mainly Catholic, where they suffered physical, psychological and sexual abuse.