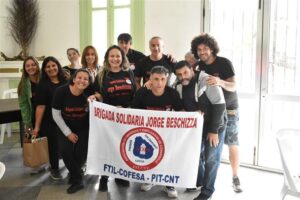 In this sense, she highlighted the historic solidarity of the Uruguayans and the support of the Association of Cuban Residents in the struggle against this criminal policy and continuous aggressions, which the people and government of the island are grateful for and consider as a support in its confrontation.

On the occasion of the World Media Marathon, she valued the wide repercussion registered in all latitudes with the participation of Cubans living abroad, friends and organizations in solidarity with Cuba, intellectuals, journalists and alternative media, among others.

The Network in Defense of Humanity, Uruguay Chapter, actively joined the event to denounce how much to limit the development and possibility of “that resilient and victorious Cuban people”, as well as residents with messages of support and condemnation.

Popa considered that the marathon was an effective tool to expand the denunciation of the blockade as a genocidal policy and to reiterate the international community’s rejection of its application and extraterritoriality.

In this regard, she criticized the implementation by the U.S. government of 243 measures to try to asphyxiate the Cuban people and destroy its Revolution, which was particularly incisive in affecting the development of science and biotechnology in the fight against the Covid-19 pandemic.

“However, today Cuba has three vaccines against Covid-19, with high effectiveness, and two vaccine candidates that are in the last phase of studies,” she emphasized.

In March, the Center for Genetic Engineering and Biotechnology made official with the World Health Organization our interest in having the Abdala vaccine be submitted for evaluation by that organization.