Ecuadorian sociologist defines Cuba as an example of dignity 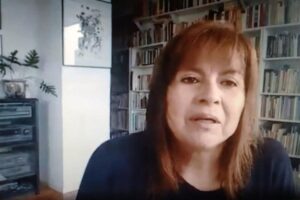 Ecuadorian sociologist defines Cuba as an example of dignity

“And that is just part of an integral perspective, of a sense of humanity and a collective approach, which places the human being above capital. It also makes a difference in times when individualism is consubstantial to this global systemic crisis that is affecting us,” he said.

Leon, who joined the 24 Hours against the Blockade, a media marathon organized by the Europe for Cuba channel to denounce the economic, financial and commercial siege of the United States against Cuba, added that the Caribbean country is unique in Latin America and the Caribbean.

Among its achievements, he highlighted the development in scientific research, which has allowed it to create its own vaccines and treatment against Covid-19, in addition to other diseases.

He also mentioned the cultural potential of this Antilles nation, which respects, values, encourages creativity and diversity, and is a reference in the production of its own and critical thinking.

She then asserted that the U.S. government’s blockade of more than 60 years is the antithesis of the solidarity, reciprocity and the characteristic respect of the archipelago in its relations with the world and shows how capitalism is imposed and not negotiated.

For the intellectual, blackmail and threats from the northern territory are imposed outside international instruments and institutionality and even against the will of the majority of states that pronounce themselves against Washington’s unilateral measures, year after year.

“Even by common sense, the blockade is an inanity that must end. Let’s go all out Cuba, now and always!”, she concluded.