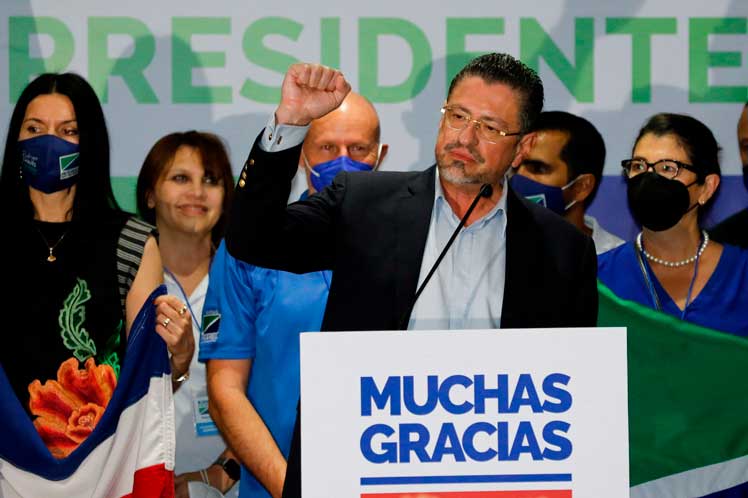 With 98.15 percent of ballots counted, Chaves, a 60 year-old economist, became the president of Costa Rica this Sunday, by obtaining 52.85 percent of the valid votes.

His opponent, former President Jose Maria Figueres, of the National Liberation Party (PLN), got 47.15 percent, and abstentionism reached 43.23 percent, higher than on the February 6 first round of elections, when it was 40.29 percent, while null and blank votes totaled 50,860.

With that result, the Costa Rican voters not only gave the victory to the candidate who based his political campaign on being an anti-system and guarantee that his cabinet will not include national politicians who, according to him, are responsible for the current situation of this nation for almost 40 years.

In addition, the voters ignored the accusations against him because Chaves concluded almost 30 years of work at the World Bank overshadowed by complaints from two female workers who attributed to him ‘sexual harassments’ and an ‘unwanted inappropriate behavior’ between 2008 and 2013.

Since the first round of the general elections, he insisted on describing those accusations as gossip and lies, and everything seems to indicate that his promises of an honest Government and that he will seek to end the privileges that make Costa Rica one of the 10 most unequal countries globally have been more important for Costa Ricans.

Also, for the third time, a representative of a non-traditional party will take over the presidency of Costa Rica, as the PLN and the Social Christian Unity Party or other forces of Calderonism (Rafael Calderon Guardia) had alternated the presidency until 2014, when Luis Guillermo Solis, from the Citizen Action Party (PAC), won.

In his speech at the Radisson Hotel in this capital, Chaves affirmed that “I receive with the deepest humility this sacred decision of the Costa Rican people, it is not for me a moment to celebrate, this result is not a medal or trophy, but an enormous responsibility with many hardships that we are all going to solve.”