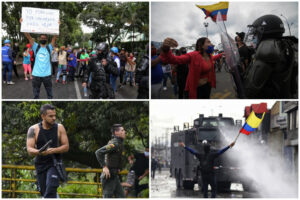 According to what is known so far, the officers are allegedly involved in different events and have different levels of possible participation.

During the anti-government protests in the context of last year’s National Strike, which began on April 28 and lasted for nearly three months, the government militarized Cali city, generating a strong wave of protests against this measure.

Last May 29, lawyers and politicians in Colombia rejected an order from President Ivan Duque for the maximum deployment of military force in that city, capital of the Valle del Cauca department, as well as in eight other departments “to provide assistance to the police” in the face of the crisis in the country.

In that scenario there were numerous complaints of abuse by the public force against demonstrators, as well as the participation of armed civilians, protected by police and military agents who, with firearms, shot at the demonstrators.

In December last year, the UN Office for Human Rights in Colombia presented a report in Geneva, called Lessons Learned and Observations from the National Strike 2021, the second one presented in those days, on the violence by the security forces in demonstrations.

“There are well-founded reasons to sustain that serious human rights violations have been committed, such as arbitrary deprivations of life and violations to personal integrity and security, derived from the unnecessary or disproportionate use of force; arbitrary detentions; sexual and gender violence; and acts of discrimination and racism,” the text underlines.

It detailed that 22 murders took place in Cali last May and June in the context of the national strike against the economic and social policies of the Duque government.