Presidents of Chile and Argentina advocate for regional integration 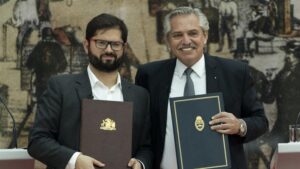 Presidents of Chile and Argentina advocate for regional integration

Buenos Aires, Apr 4 (Prensa Latina) The president of Chile, Gabriel Boric, and his Argentine counterpart, Alberto Fernández, today advocated for unity and integration of Latin America, during a meeting at the Casa Rosada, in this capital.

In statements to the press after a meeting and the signing of bilateral agreements, both leaders stressed the importance of strengthening ties between the two countries and promoting solidarity and the fight against inequality at the regional level.

I wanted my first visit to be to Argentina because I feel a deep brotherhood with this people and we must replicate that spirit of cooperation. Chile is part of Latin America, that is our base and from there we are going to build community, region, cooperation and internationalism, said Boric.

“We come with a broad entourage to be able to deepen the bilateral relationship because in matters of State, policies have to transcend the rulers of the day and the brotherhood between peoples, going beyond the preferences of one or another president,” he added.

Likewise, he asserted that Latin America has to recover a united voice on the global stage as there are challenges that are deeply shared.

Here they have an ally in the battle against inequality and for a fairer world, he pointed out and expressed his support for Argentina’s efforts to regain sovereignty over the Malvinas Islands.

For his part, Fernández indicated there are many points in common between both governments, including the search for a more egalitarian society, collaboration and peace.

Latin America is a zone of peace and every day more efforts are made so that democracy and institutionality are preserved and deepened. We are in a time where no one is saved alone and, therefore, solidarity between sister peoples is central to being able to move forward, he pointed out.

Chile and Argentina have a common destiny that we must take care of. This is just the beginning of a deep work that we want to carry out in areas such as gender policies, care for the environment, science, technology and economic exchange, he indicated.

In addition, he advocated for the project of an interoceanic corridor linking the Atlantic and Pacific oceans to multiply trade capacities.

Fernandez also urged to promote development with prosperity for all.

It is not worth our economies growing if wealth is concentrated in a few and misery reaches many, he stated.

The heads of state presided over the signing of a memorandum of understanding on Cooperation in Gender Equality and Empowerment of Women, Consular Affairs and for the preservation of memory in both nations.