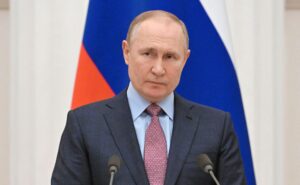 “Food self-sufficiency is Russia’s real competitive advantage and it should work in the interests of our citizens. We must protect them from price fluctuations on the world food market,” he said.

The Russian president called on the government to control this situation “permanently, with a clear and visible result for people and businesses,” the official Kremlin website reported.

He warned that this year, in the context of global food shortages, Russia will need to be more careful with regard to exports in the sector, especially to countries that maintain a hostile policy against it.

He recalled that Russia already has a floating tariff on grain and sunflower oil exports, while the fertilizer’s market was regulated for the stable work of farmers.

“We made those decisions well in advance and we did the right thing,” Putin stressed.

During his speech, he urged to control the supply of the industry with fuels, seeds and breeding products.

He also drew attention to the importance of having modern equipment and spare parts under the conditions of external restrictions.

The head of State said that the situation in the world food market worsened in the last few weeks, but it became notably more complicated in the last two years due to mistakes made by developed countries.

“Errors in economic, energy and food policies by the developed countries led to a sharp increase in food prices worldwide,” he emphasized.