Women at the Center of Transformations 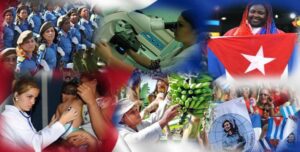 Women at the Center of Transformations

The foundation of the Federation of Cuban Women (FMC) in 1960, which currently groups 90 percent of women over 14 years of age, allowed them to participate in policy-making and the implementation of measures to eradicate prejudices and stereotypes that had them keep a subordinate position in the society.

Today, over 60 years later, Cuban women hold nearly 49 percent of seats in the National Assembly of the People’s Power (Parliament), while 51 percent of the provincial governments and 34 percent of municipal leaderships are headed by women.

According to statistics by the Ministry of Science, Technology and Environment, of the 89,214 people dedicated to those activities in the country, 53 percent are women, who also account for 68 percent of the 7,750 scientists registered at the end of 2019.

Cuba currently has 13,731 health collaborators in numerous countries, and women represent 54 percent of those professionals.

Far beyond the achievements attained with regards to equal contribution in the fields of production and leadership tasks and the recognition of their contribution to the family as the heart of the society, the experts note that they face sexist cultural barriers that hinder their full personal satisfaction.

Therefore, the implementation of the National Program for Women’s Growth is considered a cornerstone in fostering actions aimed at ensuring equal rights and the institutionalization of women-related policies.

That initiative updated the National Action Plan of 1997, with the objective of preserving the achievements conquered and allowing Cuban women to grow in the middle of the ongoing transformations.

On the other hand, the Families’ Code draft bill, currently under popular consultation, recognizes the economic value of the household work, care for the elderly or disabled people and emphasizes the figure of vulnerable divorced women with pension, as well as the protection of children and older adults.

It likewise includes the gender-based violence issue in the family legislation, previously written down on the Penal Code only and in administrative law in a lesser degree; characterizing all forms of violence: physical, psychological, economic and sexual.

For the occasion, FMC General Secretary Teresa Amarelle stressed the role of Cuban women in the middle of the reinforcement of the U.S. economic, financial and commercial blockade and the complex situation caused by the COVID-19 pandemic.

They, she said, are examples of their role in transforming the society, with an active participation in the country’s main decision-making policies and are champions in the conquest of rights. ef/em (published in The Havana Reporter)