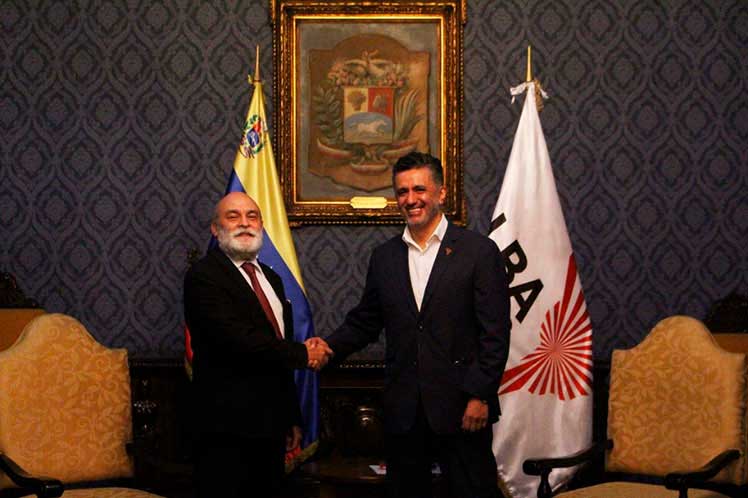 Through his account on the social network Twitter, the executive secretary of ALBA-TCP, Sacha Llorenti, reported on a meeting held with the Venezuelan Vice Foreign Minister for Multilateral Affairs, Rubén Darío Molina, in which they addressed issues related to the world situation.

“We reviewed the pending agenda and followed up on progress to date,” Llorenti said on the communication platform.

In relation to the conflict between Russia and Ukraine, Deputy Minister Molina stated that it is a complicated situation for multilateralism with repercussions for the well-being of the peoples in terms of food and energy security.

The Venezuelan diplomat described the meeting as fruitful, and assured that Venezuela and the integration mechanism will advance in unity and coordination to face the common problems of Latin America, the Foreign Ministry reported in a press release.

In a geopolitical scenario marked by the impact of the Covid-19 pandemic and the hostility of the United States, the countries of the Alliance underlined in their last high-level summit the importance of integration in the face of the hegemonic interests of Washington and the threats to peace in the region.

The 20th ALBA-TCP Summit concluded with the approval of the regional entity’s Post-Pandemic Work Plan, aimed at consolidating a common agenda in the economic, political and social spheres, in addition to the creation of an Observatory against Interference.

Created in 2004 at the initiative of the revolutionary leaders Fidel Castro (1926-2016) and Hugo Chávez (1954-2013), the integration bloc is currently made up of Cuba, Venezuela, Bolivia, Nicaragua, Dominica, Saint Vincent and the Grenadines, Antigua and Barbuda. , Saint Kitts and Nevis, Saint Lucia and Grenada.