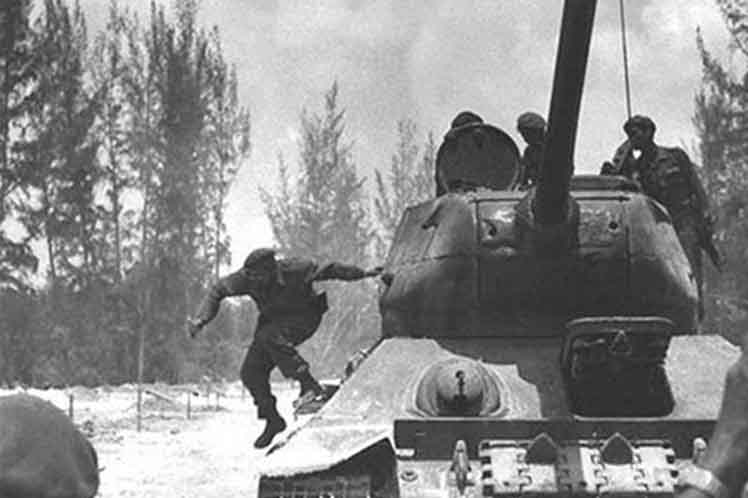 Operation Pluto was the prelude to the armed incursion directed by the Central Intelligence Agency, which aimed at triggering a psychological war and internal subversion actions to destabilize the emerging Cuban Revolution.

With the objective of carrying out the mercenary actions, the U.S. government created the Brigade 2506, made up of Cuban exiles such as ex-soldiers, policemen and henchmen of the overthrown regime of Fulgencio Batista.

Located on the southern coast of the western province of Matanzas, Playa Girón was chosen for the failed landing operation because it is a hard-to-access swampy area.

In fact, the air raids against the Santiago de Cuba, San Antonio de los Baños and Ciudad Libertad Airports on April 15, 1961 raised the alarm. The objective was to destroy the reduced Cuban air fleet.

It was on April 16 during the funeral service of the victims that Fidel Castro proclaimed the socialist character of the Revolution under the slogan Homeland or Death! He also called the people to take up arms to fight the imminent invasion.

The incursion began very early on April 17 through Larga and Girón Beaches, remote places in Ciénaga de Zapata (Zapata Wetlands). It was a member of the Cuban militia who raised the alarm.

On the first day of combat, the revolutionary pilots brought seven planes down, including bombers. While the Houston and Río Escondido Vessels, which were carrying weapons for the enemy troops, were left out of action.

The counteroffensive led by Fidel Castro began on April 18, and involved Rebel Army forces, combatants from the National Militia School, the National Revolutionary Police, air defense artillery battalions, and the militia battalions from the provinces of Cienfuegos, Matanzas and Havana.

The attacking troops lost control of Playa Larga and were forced to withdraw to join the other members of the invading brigade. On April 19, the last day of fighting, the mercenary troops found themselves surrounded in Girón and finally surrendered. Although some of them tried to escape, the majority was captured.

The mercenary troops reported over one hundred casualties and 1,197 prisoners, while the Cuban side had 176 fighters dead and 300 injured.

Six decades after the Bay of Pigs invasion, the island still faces U.S. aggressions, which aim at asphyxiating the economy and causing chaos within the population.