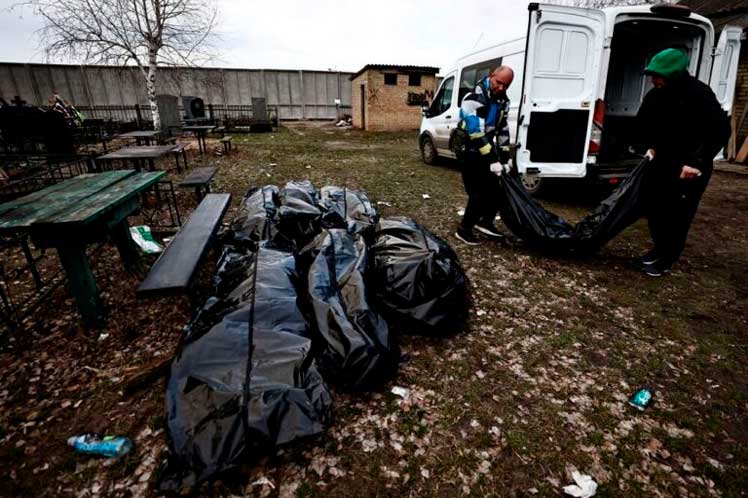 At a press conference this Wednesday, the official pointed out that the guilt of these media is not only linked to the dissemination of forgeries and misinformation, but also to their complicity in the events.

She clarified that, however, it remains open due to the alleged involvement of the “Ukrainian regime and all those who are complicit” in these crimes.

She also drew attention to how Western politicians and media did not even try to verify the information presented and immediately published it as proof of Russia’s guilt. That is why “they are personally responsible for supporting the crime that the Ukrainian regime committed,” she said.

In her opinion, it became clear that “this terrible criminal forgery, its script, was fabricated to justify a pre-prepared package of sanctions, including the large-scale expulsion of Russian diplomats from various Western countries.”

She denounced that the other reason is to try to complicate, or even completely disrupt, the negotiations between Russia and Ukraine, in which, according to Zakharova, Kiev had begun to show signs of a realistic approach.

The Russian spokeswoman indicated the discussion in the Security Council of the United Nations on the subject showed that Western representatives avoid analyzing the flagrant inconsistencies of the images of Bucha that their media showed.

This Tuesday, Russian Foreign Minister, Sergey Lavrov, stated that the killings of civilians in Bucha were a provocation aimed at ending the negotiations between Kiev and Moscow and refuted the responsibility of the Russian troops in the events.

According to the Russian foreign minister, every time there is reason to expect “some progress, even modest” in the negotiations between Moscow and Kiev, circumstances arise that block them.

For his part, Russia’s representative to the United Nations, Vasili Nebenzia, blamed the Ukrainian radicals for the massacre, arguing the existence of hundreds of video evidence.

According to the media, the UN General Assembly is scheduled to vote this Thursday on the possible suspension of Russia from the Human Rights Council of the organization in relation to the military operation in Ukraine.