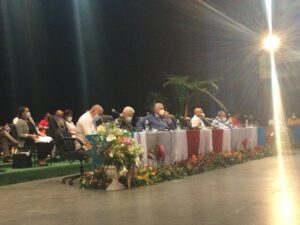 After the meeting of the Guantanamo territory, held in the morning, local time, the Santiago communists are preparing for a self-critical debate on the management of the country’s main political force, which impacts all spheres of the economic, political and social life of Cuba.

This Thursday morning was nurtured by the symbolic force emanating from the tribute to the heroes of independence lined up in the front strip of the Santa Ifigenia heritage cemetery, with the tombs of José Martí, Fidel Castro, Carlos Manuel de Céspedes and Mariana Grajales.

Equally significant was the tribute to the heroine of the Sierra and the plain Vilma Espín, daughter of this land who would be 92 years old on this date.

The nearly one million 50 thousand inhabitants of this demarcation had access during the week to the Central Report, published in the Sierra Maestra newspaper, and to the work projections for the new stage, in the heat of the continuity of the Eighth Congress of the PCC, developed almost a year.

During the previous days, the representatives of the militancy in the territory visited places of economic and social interest, among them the Tamara Bunke Maternity Hospital, undergoing a total rehabilitation that with modern equipment puts it in better conditions for its noble function.

The Heredia theater, which hosted the Fourth Congress of the Communist Party of Cuba in 1991, for the first time outside the city of Havana, will host the sessions.