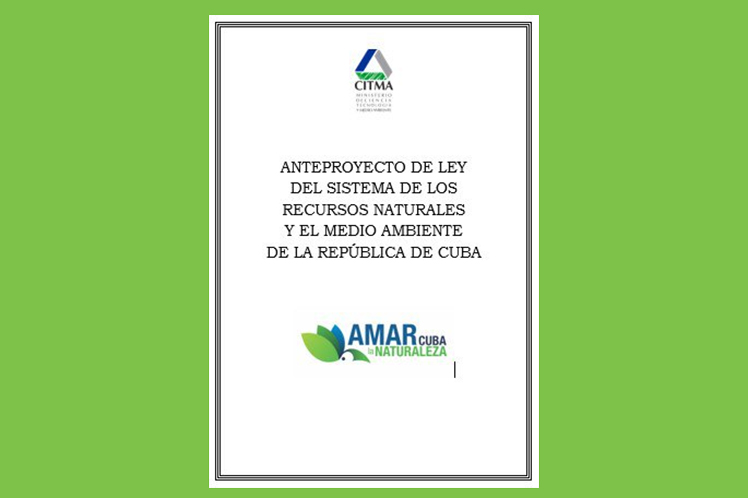 According to statements made to the press by Teresa Cruz, a specialist at the Ministry of Science, Technology and the Environment (Citma), the mission of this law is to articulate the different policies associated with natural resources and the dissimilar legal frameworks existing in the nation.

It is an inclusive, broad, project developer that defends models such as the circular economy and systemic and landscape approaches, she said. In addition, she delved into it, it has a title on the natural resources system where Citma’s role as guarantor where search for sustainable development is made clear, another on biological diversity and one on climate change.

The bill, she said, is currently under consideration by the National Assembly of People’s Power (Parliament) and available to the Cuban population, whose criteria and considerations can be obtained through the website of that entity.

The Citma specialist Lourdes Coya, maintained for her part, that on the island there is institutional, legislative and programmatic support for attention to the problems associated with the loss of biodiversity and the deterioration of ecosystem goods and services in the island.

The Constitution of the Republic itself recognizes the right to a healthy environment and there is also a section in the draft bill dedicated to the preservation of diversity, she said.

The official mentioned that other regulations, such as the government plan to confront crimes and illegalities that affect forest resources, flora and fauna, seek to contribute to the environmental goals established in Cuba.

Now, she explained, work is being done on updating a new cycle of the National Program on Biological Diversity, which has already passed four phases of implementation, and whose content defines the national goals in this sphere and the measures to establish control over direct and indirect threats.

The priorities for this new stage, designed until 2030, were defined as processes inherent to environmental education and culture, issues of integration in development planning, the implementation of financial solutions and the training of human resources, she pointed out.