US analysts question effectiveness of sanctions on Russia 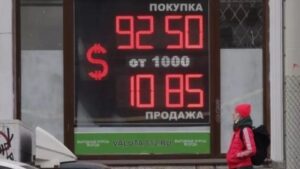 US analysts question effectiveness of sanctions on Russia

In the past six weeks, the White House and its allies in Europe and Asia have imposed unilateral measures on Russia’s large financial institutions, its central bank, the military industrial supply chain; as well as President Vladimir Putin and senior government officials, businessmen and other supporters

They banned imports of Russian oil into the United States, and developed plans to phase out gas and coal, albeit slowly.

This week, the Treasury Department banned Russia from making sovereign debt payments with dollars deposited in the northern country’s banks, which could push Russia into its first default in a century.

But, according to the Times, Moscow has continued to pay its debts. Currency controls imposed by the Eurasian giant’s central bank, coupled with ongoing energy exports to Europe and elsewhere, have allowed the national currency, the ruble, to stabilize and are replenishing the country with more dollars and euros.

This makes us question the effect of the sanctions and puts us on the alert about the impact they have on the world economy, declared to the American media the

Former Undersecretary of the Treasury for the Financing of Terrorism and Financial Crimes Juan C. Zárate.

He explained that the department admitted that it fears creating unforeseen consequences that will shake the financial system and exacerbate the inflation that is skyrocketing in much of the world, especially in the United States.

Washington, which does not depend on Russian energy, has considered how far to go with its measures because much of Europe depends on it, he clarified.

The West’s economic war against Russia, New York Times journalist Alan Rappeport added, is entering a critical phase as the Russian government finds ways to evade or mitigate its consequences.

According to the economic analyst, the sanctions on the Eurasian nation have already caused a rise in gasoline prices, and officials fear they could cause spikes in the value of food and cars, as wheat exports are interrupted. and minerals.

The White House’s main goal has been to inflict maximum pain on Russia, but it is inevitably causing undue damage to the rest of the world, the source concluded.