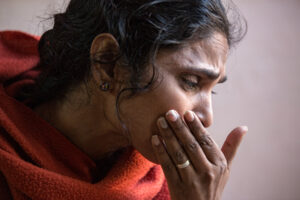 The meeting adopted a resolution, which noted that gang rapes, abductions, physical and mental abuse, torture of various kinds, death threats and rape, including of young girls, are not isolated incidents and are part of a larger systemic problem.

A Thompson Reuters Foundation report ranked India as the most dangerous country for women regarding human trafficking, including sexual slavery and domestic servitude, and for practices such as forced marriage, stoning and female infanticide.

Data released by the National Commission for Women show that violence against women increased 46 percent in the first eight months of 2021 over 2020, and about 35 percent of the cases were related to husbands and relatives.

The National Crime Records Bureau informed that the country reported an average of 87 rapes a day in 2019.

A total of 405,861 cases of crimes against women were reported that year, according to government data released in 2020.

According to statistics, a woman is raped every 16 minutes in India. Meanwhile, the denial of women’s right to decide for themselves, growing caste arrogance and the policy of hatred towards minorities lead to an increase in killings in the name of “honor.”

Harassment and dowry-related deaths are also societal evils, it added.

Convictions of those accused of crimes against women are not adequately ensured either and it happens in only 25 percent of cases.

The 23rd Congress of the Communist Party of India (Marxist) demanded faster, decisive and effective interventions, mobilizing more people of both sexes against injustice and violence and for women’s equality.