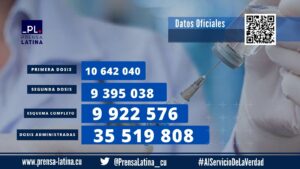 According to statistics from April 8, the Minsap informed that a total of 35,519,808 doses of the homegrown Soberana 02, Soberana Plus and Abdala vaccines have been administered so far.

The first dose has been administered to at least 10,642.040 citizens, including those convalescing from Covid-19 (a disease caused by the SARS-CoV-2 coronavirus), who have received a single dose of Soberana Plus.

The Minsap added that 9,395,038 Cubans have already received a second dose of vaccines, and 9,080,011 have been administered the third dose, while the booster shot has been given to 6,402,082 in selected territories and risk groups.

With at least one dose of its homegrown vaccines, Cuba follows the United Arab Emirates and Portugal, and it ranks ahead of Brazil, Bangladesh, the United States, Indonesia, India, Mexico and Pakistan. Cuba remains third in the index of people with the full vaccination scheme, behind the United Arab Emirates and Portugal, while it is ahead of Chile, Singapore, China, Canada, Brazil, Italy and Japan.

Data from Our World in Data indicate that 64.7 percent of the global population has received at least one injection against Covid-19, and 11.37 billion doses have been administered worldwide.

Only 14.8 percent of people in low-income countries have received at least the first dose of a vaccine to date.