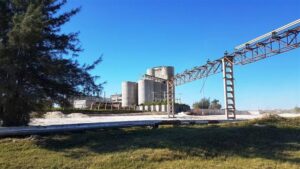 Camagüey, Cuba, Apr 12 (Prensa Latina) In one of Cuba's cities with the largest industrial infrastructure, remodeling the 26 de Julio Cement Factory is a priority today for the country's top government leadership.

After five decades of constant exploitation, the 26 de Julio Cement Factor, located in Nuevitas, a coastal city that is 70 kilometers north of the provincial capital, put on hold its machines in 2018 to enter into a broad process of technological modernization, which is vital to increase the plant’s installed capacity and quality of products.

Cuba, with extensive plans to improve construction programs to both develop the tourism sector and improve the situation of housing, has pinned its hopes on these factories that will enhance and improve the lives of the Cuban population.

Recently, Deputy Prime Minister Ramiro Valdes assessed the results of investment that, according to the digital website the Adelante weekly, “still presents difficulties of low productivity, and shows problems of availability of lifting and handling equipment, and the allocation of other resources.”

Nuevitas also stands out for the various maintenance works for the sake of a positive social and economic impact, which are being carried out in the first half of this year at the 10 de Octubre Thermoelectric Power Plant in the coastal town.

According to the Ministry of Energy and Mines, the potential of the Nuevitas plant is fundamental for the National Electric Union, particularly in a territory that connects center with eastern Cuba.

Meanwhile, for the Ministry of Science, Technology and Environment (Citma), the management of Nuevitas Bay, a crucial area for the socioeconomic development of central-eastern Cuba, is also among the priority plans the country’s largest province.