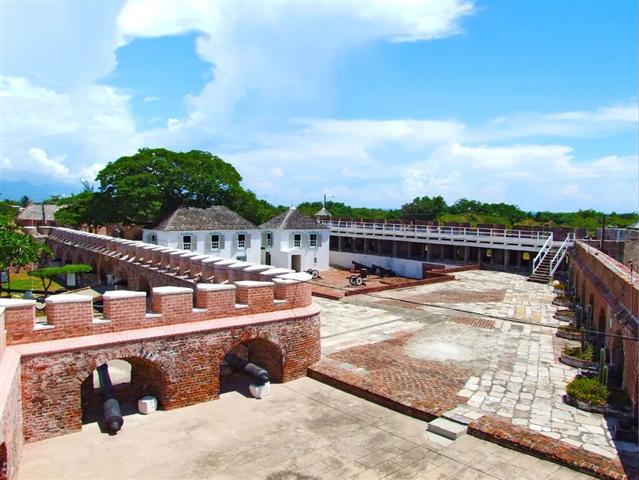 On the Caribbean islands, fortresses erected in the 16th, 17th and 18th centuries to protect the prosperous colonies from attacks by corsairs, pirates and rival powers, are a fundamental registry of the evolution of the then called New World.

For a long time Jamaica was the most precious British colony overseas and a source of vital resources, which should cross the Atlantic to enrich the colonial power.

Its unstoppable development encouraged lootings and attempts to conquer it, forcing the crown to invest in its protection, with a military increase and the building of fortresses, such as Fort Charles, in the legendary city of Port Royal.

What began as a little settlement quickly became a prosperous place, the colonial government headquarters and main commercial center, which required a defensive structure.

The construction of Fort Charles, the first such site of its type, wound up in the late 1650s, and was originally named Fort Cromwell to honor Oliver Cromwell, who ordered the town to be founded a few years earlier.

Most of the military building is surrounded by the sea, and its location at the entrance to the bay turned it into a strategic position that guaranteed watching on time any hostile float or ship and organize the city’s defense.

The next years it went through changes, with the objective of expanding and improving its defensive capacity. For example, in 1665 it had 36 cannons of different calibers, and almost a century later the number of artillery pieces tripled, while the garrison had over 500 men.

It later changed its name to Fort Charles to honor the restoration of the British monarchy when King Charles II took the throne, and survived the earthquake in 1692, which plunged most of the city under water.

Such a disaster forced colonial authorities to move the government’s headquarters to Kingston, since then the island’s capital and main commercial center. In 1907, the fort again withstood an earthquake, but its fate was sealed forever. From then on it would no longer be the guardian that challenged nature and stopped the greed of men, and became one of the country’s main tourist attractions.

Pirates and corsairs no longer sail Caribbean waters; however, the red tile fortress maintains a good structure, preserves an important part of its artillery pieces and there is a museum inside open to the public everyday throughout the year, except on holidays.

PHOTO CAPTION: Its location at the entrance to the bay turned it into a strategic defensive position. (Published in Orbe)