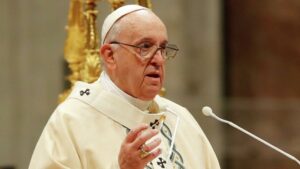 “In the face of the persistent signs of war, as in the many and painful defeats of life, Christ (…) exhorts us not to give up in the face of evil and violence,” the Supreme Pontiff said in his Address.

On this Holy Sunday, Pope Francis affirmed that “every war brings with it consequences that affect all of humanity: from the mourning and drama of the refugees, to the economic and food crisis, whose sings are already being seen.”

“Please, let us not get used to war, let us all commit ourselves to asking for peace with a powerful voice, from the balconies and in the streets,” the pope said.

The pontiff urged that “those responsible for nations listen to the people’s cry for peace” and the “disturbing question that scientists asked themselves almost sixty years ago: Shall we put an end to the human race; or shall mankind renounce war? as per the Russell-Einstein Manifesto on July 9th, 1955.

“May the conflict in Europe also make us more caring in the face of other situations of tension, suffering and pain that affect too many regions of the world and that we cannot and must not forget,” he said, and called for peace in the Middle East, “torn for years by divisions and conflicts”.

The Pope advocated for the Israelis, Palestinians and all the inhabitants of the Holy City, together with pilgrims, to be able to experience the beauty of peace, live in brotherhood and freely access the Holy Places, respecting each other’s rights.

The Pope also called for peace and reconciliation in Lebanon, Syria and Iraq, and especially in the Christian communities of the Middle East; also for Libya, Yemen, Myanmar and “the entire African continent”, in particular the Sahel region, Ethiopia and the Democratic Republic of the Congo.