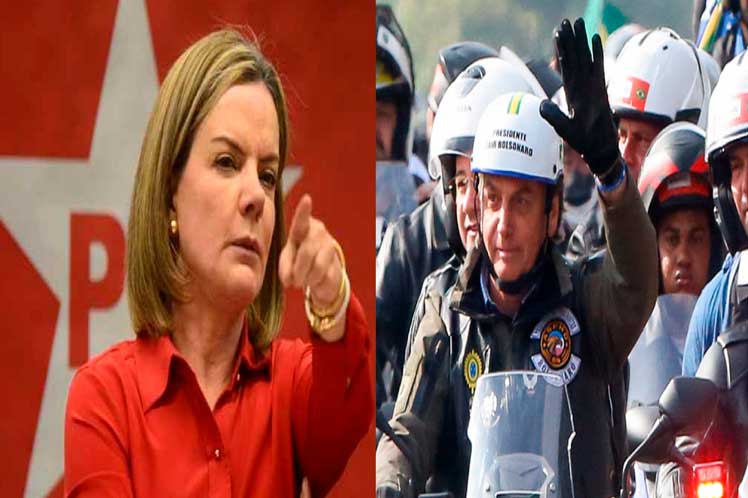 Brasilia, Apr 18 (Prensa Latina) The Workers' Party (PT) of Brazil filed an action again at the Superior Electoral Court (TSE) against President Jair Bolsonaro for the motorized caravan he organized in Sao Paulo, which it considered it "early electoral propaganda".

On its official website, the PT charged that Bolsonaro led a convoy of some 3,700 motorcycles last Friday in an event called Accelerating for Christ.

According to Lawyers Eugenio Aragão and Cristiano Zanin, responsible for the action presented to the TSE, Bolsonaro participated in the organization of the event, convened it publicly, drove his motorcycle along the stipulated route, paraded in an open vehicle and climbed on another one to ask for votes.

The PT argues that it rules out any attempt to classify the narrated events “as derived from the exercise of the office of the President of the Republic or to consider the defendant a mere beneficiary of the events.”

The entourage convened by Bolsonaro cost the State’s public coffers nearly one million reais (about 200,000 dollars), used to reinforce surveillance, according to the Sao Paulo Public Security Secretariat.

“A force of more than 1,900 military police officers were used in the operation throughout the entire route to protect people, preserve property and guarantee the right of entry and exit, as well as free participation in the rally and the flow of traffic,” according to the statement by the PT.

The cost of the first motorcycle caravan in São Paulo in June, also lead by Bolsonaro, exceeded 1.2 million reais (240,000 dollars) and included the participation of 1,433 police officers, five planes, 10 drones and about 600 vehicles.