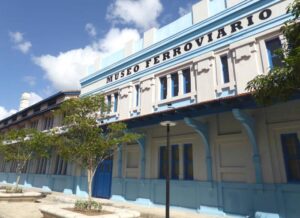 Camagüey, Cuba, Apr 20 (Prensa Latina) The various objects of the Railway Museum, crucial in the socio-historical development of this city, on Wednesday were granted the Restoration Award of the National Council of Cultural Heritage.

More than three years of intense work with the leading role of the Office of the Historian of the City of Camagüey, allowed the rescue of an emblematic space in one of the first regions of the country where the railroad was introduced in the mid-nineteenth century.

The building is located on the premises of the Historic Center, a World Heritage Site, and a few meters away from the Plaza Hotel, the oldest hotel in operation in the city, which was visited by Gabriela Mistral, Nobel Prize winner in Literature.

In a ceremony held at the Atares Castle in Havana, on the World Day for Monuments and Sites, Jose Rodriguez, director of the OHCC, spoke about the crucial importance of preserving spaces of this kind, which are material representatives of the most valuable aspects of culture.

Now, in one of the areas most visited by lovers of city tourism, visitors will be able to enjoy a complex where locomotives from the 19th and 20th centuries are exhibited on the outside, in addition to a room that reviews railroad trips in the former Villa de Santa Maria.

“This work that recreates the entire course of the history and development of this means of transportation in the province, is part of an immense legacy to cover spiritual and material needs, so I thank all those who helped safeguard this historical memory,” Rodriguez commented, just at the inauguration in February.

Camagüey, which had its first stretches of railroad lines in 1851, with the Puerto Principe-Nuevitas route, in the north, recalls Gaspar Betancourt, El Lugarareño, the architect of the incursion of this means of transportation in the territory.