Panama favors coordinated regional actions in the face of migration 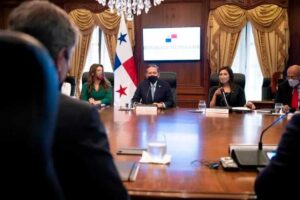 Panama favors coordinated regional actions in the face of migration

Greeting participants via videoconference in a second meeting on migration, attended by US Secretary of State, Antony Blinken, amid an ironclad security device, the president confirmed the commitment with the strategic partner and other nations to address the phenomenon with shared responsibility and concrete policies in the short, medium and long term.

Cortizo insisted on the need to address the issue with a comprehensive approach, to achieve joint and articulated agreements with multilateral and international financial organizations, because irregular migration, he said, also demands sufficient resources to avoid a humanitarian crisis of serious proportions.

In this regard, he recalled that people who migrate as a rule travel through improvised and unsafe routes, in reference to the Darien jungle, bordering Colombia, where migrants are victims of criminal groups that violate their human rights.

Panamanian Foreign Minister, Erika Mouynes, said that migration is a complex and global phenomenon, which tends to be magnified as a result of economic conditions such as Covid-19, climate change, political instability or global war conflicts.

In this regard, he asked those attending the meeting to focus on three objectives, the first of which is to agree on a framework to facilitate the standardization of migration policies in the region.

He also urged to expand collaboration efforts in the fight against organized and transnational crime and to expand cooperation between states, international organizations and regional development banks to address the structural causes of migration.