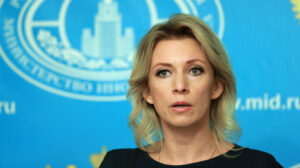 She recalled that the proposal to start talks came from the office of Ukrainian President Vladimir Zelensky, and was accepted by Moscow.

In her opinion, over the past few years the approach to negotiations in Kiev has been built in the same way. She gave as an example the negative path taken since 2014 by the Minsk Agreements on ending the internal conflict in that country, which were not implemented.

The representative of the Russian Foreign Ministry noted that Moscow has already lost confidence in the Ukrainian negotiators, so the results of the talks are verified on the ground.

In recent days, the head of Russian diplomacy, Sergey Lavrov, pointed out that authorities are in favor of maintaining dialogue with Ukraine, despite its changes of position.

“I see no reason why we can’t continue, even if the Ukrainian side makes turns, sometimes 180-degree turns, rejecting what it itself proposed a couple of days ago, for example. But we are patient and persistent people,” he told national television.