US is unaware of final destination of weapons sent to Ukraine 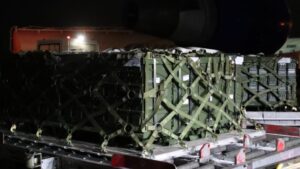 US is unaware of final destination of weapons sent to Ukraine

The United States has few ways to track the substantial supply of anti-tank, anti-aircraft and other weapons moved across the Ukrainian border, a blind spot that they justify with the absence of US troops in the European country, according to the sources quoted by local media.

President Joe Biden’s administration considers that in the long term some of that equipment could end up in the hands of other soldiers and militias, but that is a risk they are willing to take, CNN reported.

A defense official said that the White House had assessed as higher the risk of not adequately assisting Kiev .

Ukrainian forces pick up truckloads of Defense Department-supplied ordnance, mainly in Poland, and then it is up to them to determine where they go and how they are used, Pentagon spokesman John Kirby pointed out last week.

In addition, senior US officials acknowledged that by relying heavily on information provided by Ukraine, the government of President Vladimir Zelensky has an incentive to provide only data that justifies supplying more weapons and diplomatic assistance.

The aim is to send more artillery shells to Ukrainian forces after Moscow announced the start of a new phase of the offensive in Ukraine’s Donbass region.

The Ukrainians are likely to need more artillery systems and the United States will do its best to meet their needs, Kirby said on Tuesday.

The Russian Government insists that the military aid worth 2.5 billion dollars to President Vladimir Zelensky’s forces, after the start of Russia’s military operation, will not facilitate the end of the operation.