China insists on unity and cooperation to tackle global challenges 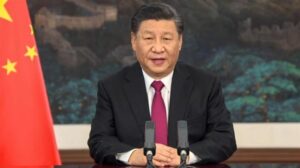 China insists on unity and cooperation to tackle global challenges

At the opening ceremony of the Boao Forum for Asia’s Annual Conference, President Xi Jinping said that the difficulties in the fight against the Covid-19 pandemic show that humanity is a community where all peoples rise and fall together, and peace, development and mutually beneficial cooperation must be promoted.

Xi called for joining forces to defeat the SARS-CoV-2 coronavirus, work toward the inclusive and balanced global development, and boost the economic recovery on the foundations of the openness, macro-policy coordination, continuous evolution of science and technology, and the supply chains stable.

He asked to uphold true multilateralism, conflict resolution through consultation, safeguard the international system with the UN, and jointly fight common problems such as climate change and terrorism.

Xi proposed to establish a Global Security Initiative aimed at promoting values such as respect the sovereignty and territorial integrity of all countries, non-interference in internal affairs and reject the Cold War mentality, confrontation and the unilateral sanctions.

The Chinese president delivered a keynote speech via video in the presence of thousands of domestic and foreign delegates attending the conference, which opened in southern Hainan province to discuss issues such as the recovery of the global economy, the development of new technologies and the sustainable growth.

The Boao Forum, known as the Asian Davos, is a non-profit organization founded in 1998 and an important platform that brings together experts from this and other regions worldwide every year to share their views on pressing issues on the global scene.