Cuba advances in presenting anti-Covid-19 vaccines to WHO 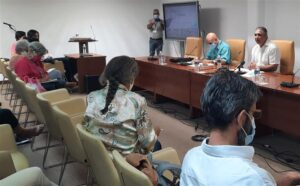 Cuba advances in presenting anti-Covid-19 vaccines to WHO

At a press conference, the director of the Cuban Biotechnological and Pharmaceutical Industry Group (BioCubaFarma), Eduardo Martínez, explained that the day before a meeting was held with those in charge of the World Health Organization (WHO) to review matters related to Abdala, whose production will be evaluated at the Mariel plant, located in that industrial pole, west of Havana.

“There has been no difficulty in the conversations between Cuba and the WHO for the development of these expert reports and the decision to transfer production to said plant is also part of the aspects to be verified,” he pointed out.

He stressed that Cuban vaccines have been approved for use in emergencies by the regulatory authority of this Caribbean nation and others where it has arrived, such as Nicaragua, Venezuela, Mexico, Iran, among others.

“There is already international recognition of our products. The results of their studies have been published in high-impact scientific journals, and the international community has reviewed data on their clinical trials,” added Martínez.

He highlighted that, from several nations, there is the endorsement of the safety of the anti-Covid-19 vaccines developed in the Antillean nation and more than 70 million doses of them have been administered inside and outside of Cuba (some 35 million 600 thousand in national territory). ).

He added that the evidence of adverse effects of these immunizers is far below similar reactions of other vaccines designed in the world to deal with the pandemic.

“But beyond all these realities, there is what they have shown in their direct impact in controlling the disease in our population, and new research will also be published on this,” he said.

Martínez explained that the Cuban Ministry of Public Health has already presented a study to The Lancet magazine on how the vaccines applied in Havana, over a period of time, caused rapid control of the Covid-19 pandemic.

He stressed that the country is currently preparing for a new generation of anti-Covid-19 vaccines with modifications compared to the current ones and it may be necessary to administer these boosters from time to time.

“Once the current process that we carry out with the WHO is concluded, we think that it will be easier in the future to update the documentation of these vaccines with other antigens because the health entity will already have better knowledge of our products, since it would be vaccines of the same nature, adapted to other requirements,” he specified.

Cuba developed three vaccines to deal with Covid-19: Abdala, the first in Latin America and in charge of the Center for Genetic Engineering and Biotechnology (CIGB) and Soberana 02 and Soberana Plus, belonging to the Finlay Institute of Vaccines (IFV).

It also has two other candidates: Soberana 01, also from the IFV, and Mambisa, from the CIGB and one of the few made in the world to be administered through the nasal route.