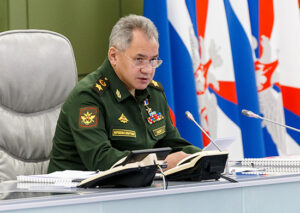 The entirety of the city of Mariupol is under the control of the Russian Armed Forces and the militia of the Donetsk People’s Republic, and the “the remnants of nationalists and foreign mercenaries are securely blockaded” in the territory of the Azovstal plant.

Regarding this, the Defense Minister assured that the Russian troops will need three or four days to complete the operation of clearing the metallurgical plant.

President Putin, however, ordered the assault on Azovstal to be canceled, describing it as impractical, ordering to enact a tight blockade around the plant instead in the name of preserving the lives and integrity of Russian soldiers and officers. He also ordered Shoigu to offer once again the possibility of peaceful surrender to those non-Azov Ukrainian troops who have not laid down arms yet, with the promise of sparing their lives and treating them with dignity in agreement with international law.

The Minister of Defense took stock of the actions undertaken for the liberation of the city, explaining that on March 11th, the day when the operation for the liberation of Mariupol was launched, the total number of Ukrainian Armed Forces and foreign mercenaries exceeded 8,100. More than 4,000 of them were neutralized and 1,478 surrendered, while more than 2,000 remain entrenched in the metallurgical plant.

He also confirmed that the nationalists parked armored vehicles and deployed artillery on the ground floors of residential buildings and placed snipers on the upper floors. In addition, they gathered the civilians in the intermediate floors and in the basements, turning them into “human shields”.

“During the liberation of Mariupol, the Russian Army and units of the people’s militia of the Donetsk People’s Republic took all measures to preserve the lives of civilians,” Shoigu said, and stated that since March 21st, humanitarian corridors have been opened daily to evacuate locals and foreign citizens.

He reported that servicemen of the Armed Forces of Ukraine were offered to lay down their arms. “They were guaranteed, of course, life, safety and medical care,” he said.