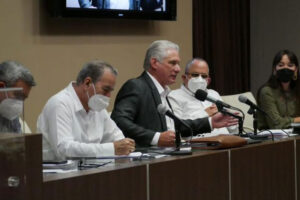 President Miguel Diaz-Canel welcomed the opening of classrooms in Higher Education after several months of preparation and adaptation due to the epidemiological situation in the country.

According to authorities, the 2022 academic year will be take place in person with 35 weeks of classes that will end this year.

This week, Cuba celebrated with political and cultural events the 61st anniversary of the military victory over the invading mercenary force of 1,500 men equipped, trained and financed by the United States.

The so-called Operation Pluto became in less than 72 hours the first great military defeat of US imperialism in the Americas, and on April 24, 1961, US President John F. Kennedy acknowledged his government’s involvement in the events.

Cuba also commemorated the proclamation, by historic leader Fidel Castro, of the socialist nature of the Revolution on April 16, 1961.

The 30th International Book Fair opened this week in Havana, with Mexico as a guest of honor at the largest literary event in Cuba.

The Cuban president described the event as a propitious prelude to the official visit to Cuba of Mexican President Andres Manuel Lopez Obrador, scheduled for May.

On the other hand, the first round of talks on migration between Cuba and the United States in Washington since 2018 also had an impact on national media.

At the talks, the Cuban side emphasized its concern about the measures taken by the US Government that stimulate migration, but prevent it legally and orderly.

The 4th governmental visit to Havana also hit the headlines this week.

President Diaz-Canel assessed the impact of the socioeconomic policies, talked with Havana residents and verified the transformations in vulnerable communities.