Literary collection arrives in Cuba from the middle of the world 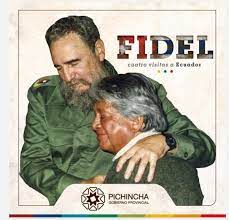 Literary collection arrives in Cuba from the middle of the world

The result of a project to promote literary production and research, the volumes fall within various thematic areas, including works with valuable scientific contributions, those related to different aesthetic expressions, as well as novels, short stories, poetry, theater, essays and chronicles.

One of the books highlighted in the selection is Fidel: Four Visits to Ecuador, in which authors Alfredo Vera Arata and Pepe Regato Cordero bring closer to the experiences, anecdotes, data and photographs that testify the relationship between Commander Fidel Castro and the Ecuadorian people.

Likewise, the volume reflects, in a very special way, the relationship forged between the historic leader of the Cuban Revolution and the Ecuadorian painter, Oswaldo Guayasamin, as a symbol of the brotherhood between both peoples.

Pichincha Bicentenaria is defined as a space consistent with a management committed to the different cultural manifestations, with products that respond to social, scientific and aesthetic processes.