May 1st Solidarity Brigade kicks off visit to Cuba 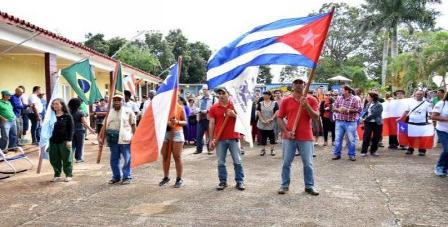 May 1st Solidarity Brigade kicks off visit to Cuba

More than 100 activists from 15 countries laid a wreath at Mella’s monument, and shouted “Cuba Viva” (Long live Cuba). They planted a tree in the Marti forest to represent the eternal friendship with the Cuban people.

The president of the Cuban Institute of Friendship with the Peoples (ICAP), Fernando Gonzalez, thanked the brigade members for accompanying the Cuban people. He said that the meeting is possible “due to the sacrifice and work of Cuban medical personnel who offer their knowledge to fight Covid-19.”

Cuba has had to deal with the hostile policy of the United States, its attempts at asphyxiating the economy and generating social discontent “and those attempts will be responded by our people with more firmness and more capacity of resistance to move forward,” he noted.

In her welcoming remarks, South African member Lefika Chetty expressed her discontent with the media destabilization campaigns carried out by the US Government against Cuba.

Colombian teacher Luz Elena Bernal is part of the Solidarity Committee with Cuba, and together with eight people who make up her delegation, she is excited about the revolutionary work and the possibility of parading in Havana’s Revolution Square on May 1st.

“We express our love, admiration and respect for the Cuban people. In Colombia we will continue making the necessary denunciations against the blockade that Cuba has been able to overcome through creativity and resistance”.

In the coming hours, the “May 1st” Brigade will also be joined by Canada’s “Ernesto Che Guevara” Brigade, and they will parade on International Workers’ Day together with the Cuban people at Revolution Square, a show of unity, solidarity and in support of food production, investment and transformation programs in the neighborhoods.

They will attend the International Solidarity Meeting from April 30 and May 2, when more than 1,000 delegates from around the world will reaffirm their rejection of the US blockade against Cuba and highlight the ties of solidarity they maintain with the island nation.

They will also visit the Fidel Castro Ruz Center and scientific institutions to learn about the production of Cuba’s homegrown Covid-19 vaccines. They will also do agricultural work with youth and civil society organizations.

All brigade members will pay tribute at Commander Ernesto Che Guevara Memorial sculpture complex in Santa Clara, in central Cuba, and before their departure, the “May 1st” Brigade will pay tribute to Fidel, Marti and Cuban heroes at the Santa Ifigenia Cemetery, in eastern Santiago de Cuba province.

This delegation is made up of friends mostly from the United States, Brazil, Great Britain and South Africa, Germany, Ireland, Argentina, Chile, Colombia, Spain, Mexico, Sweden, Turkey and Vietnam.