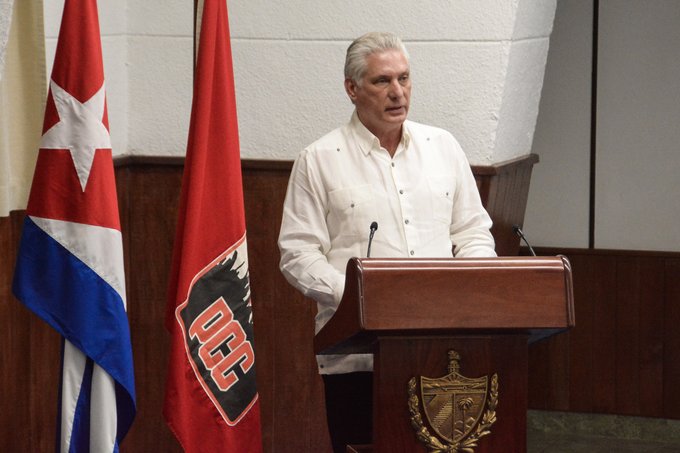 Havana, Apr 28 (Prensa Latina) The first secretary of the Communist Party of Cuba (PCC), Miguel Diaz-Canel, on Thursday denounced the media war to discredit the country's laws and the trials after the trials on July 11, 2021.

Diaz-Canel, who is also the president of the Republic, said that the United States and its subversive network, especially through its embassy in Havana, maintain an interfering and provocative attitude in order to destroy the unity of the Revolution, trying to create gaps in such sensitive and priority issues for the nation such as the family and human rights.

At his closing speech at the 4th Plenary Session of the PCC Central Committee, Diaz-Canel stressed the manipulation of the issue of the people on trial for their participation in the July 11 and 12, 2021, riots.

“Our judicial system focuses on the reeducation and reintegration into society of those who commit crimes, because humanism and respect for human beings prevail in it,” he stressed.

The head of State pointed out that those involved in the events were prosecuted in accordance with the provisions of the Criminal Law in force, with a differentiated treatment for each case, according to their participation and the crime they committed.

The trials “have been held under full compliance with the Law, with all the guarantees and with total transparency, as our judicial bodies have automatically reported,” he pointed out.

“Why are they so focused on these trials in Cuba instead of condemning the disappearance of people, social leaders and journalists assassinated daily, police abuse, clandestine torture centers, the paramilitary forces that are recognized by other governments of the planet,” the president wondered.